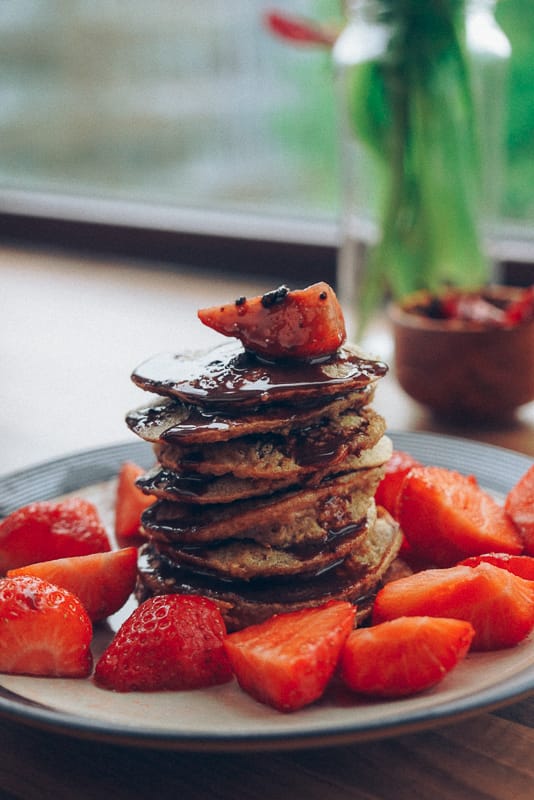 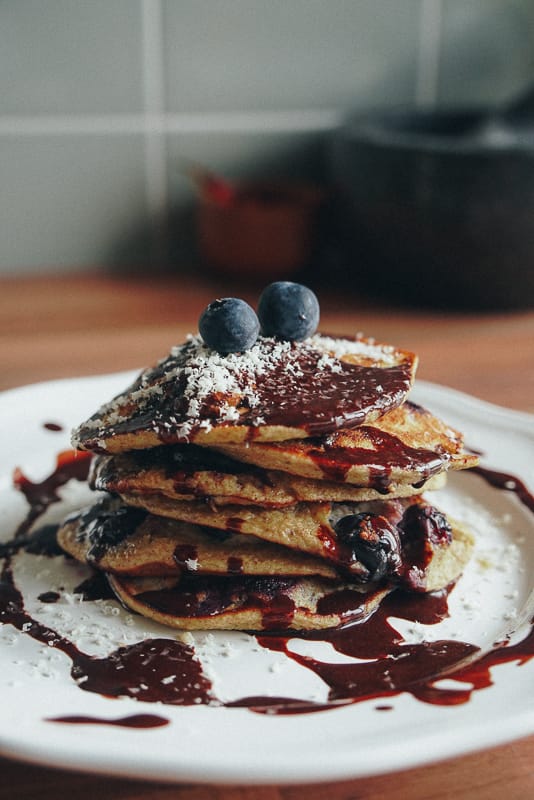 Pancakes are the classic weekend comfort breakfast. They are easy to make and very forgiving too: you can use rough quantities, make a mistake following a recipe, and they’ll still taste delicious. The endless variations also make them a dish that can suit everyone. Some people like them savoury (bacon, salmon, avocados…), other like them sweet (fruit, honey, yoghurt…) – you can easily make a batch and let each person add their favourite toppings, no need to agree on this one!

But where did it all begin? When did we start enjoying them? And where? As always, a little bit of…

It’s hard to say. Based on what I’ve read, from different sources, it all probably started in the Neolithic area, during the Agricultural revolution (circa 10,000BC), when grains were domesticated and farmers started to farm animals (cows, hens). It is then when products like wheat flour, milk and eggs started to become more abundant and people were able to develop easy, quick recipes.

Are pancakes eaten around the world? Yes they are! Like many other popular cheap recipes (croquetas, milk bread) there are siblings, cousins and more distant relatives all around the planet. SeriousEats never fails to disappoint: in this comprehensive article, they go through the myriad forms that pancakes can take, depending on where you live: crêpes in France, okonomiyaki in Japan, farinata in Italy… You name it.

The most popular pancakes nowadays in the Western world are probably American pancakes and French crêpes. Americans even developed the first pancake mix in the late 19th century, called Aunt Jemima, which became quite popular with time, allowing people to prepare pancakes even quicker.

For a while there has been a Pancake Day too, also called Strove Tuesday, which precedes Ash Wednesday (first day of Lent). In some countries, such as France,  Mardi Gras (Fat Tuesday) is the last day of “gorging” or “fat eating” before the fasting period of Lent. This became quite popular in Catholic Europe.

What is, by definition, a pancake? According to Wikipedia, a pancake is “a flat cake, often thin and round, prepared from a starch-based batter that may contain eggs, milk and butter and cooked on a hot surface such as a griddle or frying pan, often frying with oil or butter.” The main components of any kind of pancake (we’ll get more into this in a minute) are:

Flour: this is the starchy element. Any grain can be grounded into flour (wheat, oats, rice, spelt, rye), but there are other starchy foods such as vegetables (potatoes), legumes (chickpea) or nuts (almond) that can be used too.

Liquid: eggs, milk, cream, oil… Water is not as common as it doesn’t have as much body or richness as the the above-mentioned ingredients.

Cooking method: typically cooked on both sides, on a stove pan or griddle, but sometimes cooked only on one side (crêpes) or in the oven (Dutch, Finnish pancakes).

In some cases, a leavening agent or fermented is also added to the mix, it depends on your preferences or where you are eating it. 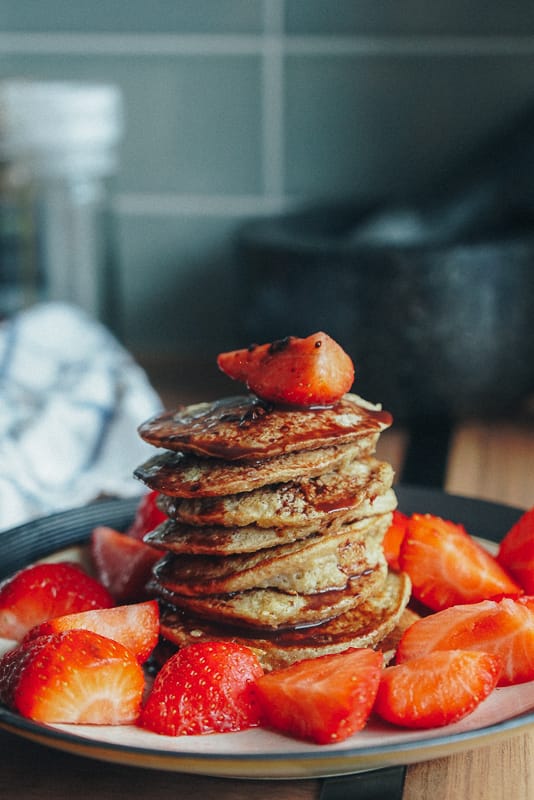 If you are interested in the science behind making pancakes you should check this out. Here, J. Kenji López-Alt goes into the ins and outs of figuring our the lightest & fluffiest pancakes by testing different version, adding or removing elements… very interesting.

The most simple and easy-to-remember recipe I’ve ever tried making is Jamie Oliver’s one-cup pancakes: 1 cup flour, 1 cup milk, 1 large egg. From there, I like to tweak it and adapt it depending on how I feel, how healthy I want to be on that given day, who I’m making the pancakes for…

This recipe I’m writing here today would fall into the healthy post-workout category, although we didn’t make them after working out (unless you consider deep sleeping a sport, which some do). This is because it’s quite high in protein and calorie-rich (about 500kcal per portion, 2 pancakes). My cousin Selin and I had planned to make them on Sunday morning, and so we did. We weren’t striving for fluffiness or lightness, we were just hungry and craving for comforting, sweet food. These pancakes are not “ambitious” therefore, but they are full of joy.

I hope you try making these and enjoy them just as much as we did!

Notes: the quantities used in this recipe yield 4-5 pancakes, depending on size

One thought on “Banana pancakes”