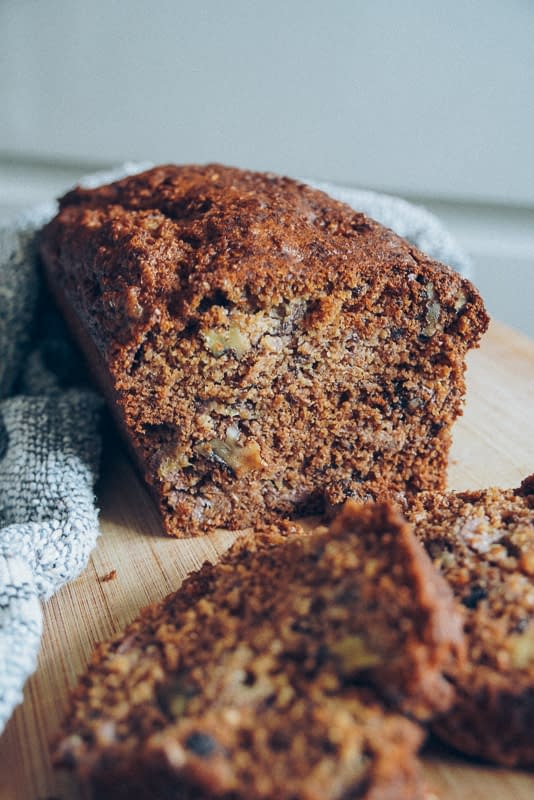 I’ve wanted to post a banana bread recipe for a long long time. But, more importantly, I’ve been wanting to find the recipe for an even longer time. I tried The Happy Pear’s, The Minimalist Baker’s, I made up my own… And then I remembered that my friend Kelsey (who I recently discovered makes the best carrot cake ever to exist on Planet Earth) had sent me this beautifully simple recipe.

I then made it a few times, tweaking it a bit and making it more “mine”. The main differences are that:

I would usually go into more detail and explain what makes it better, more moist, crunchy and ultimately, yummier. But I just can’t wait to (finally) post it. If you want answers to these questions, just bake it. You, and everyone you live with, will not regret it.

If you are interested though in having a better understanding of

Check out this link. I learnt a good amount about the science behind baking and the role each ingredient plays.

On a more tragic note, something else I learnt about this past week is how the egg industry treats chickens, especially male chickens. Unlike female chicks, males from egg-laying hens do not produce eggs and are instead culled [sacrifised], sometimes only minutes after being born, and used to feed reptiles or other animals. This happens regardless of whether the egg is laid in a free-range or caged setting. I am not sure if this is general-population knowledge, but I didn’t know this and it made me a little sick, to be honest.

I did some research on how this issue is being delt with (or if that’s even happening). I guess if we had access to small farms where we know the actual farmers and animals, this wouldn’t be much of an issue, unless you don’t care or can’t/are not willing to pay the price for more ethically produced eggs. Gladly, besides all the pessimistic articles I found, I also came across this article on CBC News from 2016, where “a major shift in egg production” is announced in Canada. A professor of bioresource engineering at McGill University has been working, together with some farmers, to develop a machine that can identify female eggs before they’ve hatched. This could potentially help avoid the culling of male new-born chicks and perhaps even create a new supply of male eggs that could be sold in the market. It seems like until recently, there were no 100% reliable technologies to identify the sex of an egg, which made killing male chicks a much more efficient practice, from a business standpoint.

If you already don’t consume eggs or just decided you won’t after reading the above, you can try the well-known vegan alternative for eggs: water and grounded flax seeds in a water 3:1 flax meal ratio. This is also known as “flegg”.

Eggs provide structure, moisture and are a leavening agent. There are many other alternatives, but the flegg option, in particular, could work in this recipe.  I haven’t tried this myself yet so I can’t give you an experience-founded opinion. Flegg doesn’t trap air or act as a leavening agent like eggs do, so it’s best to use this vegan option in recipes that also call for baking soda and/or baking powder, which will help the mix rise.

I do hope you enjoy making and eating this bread! I rarely bake but there is definitely a lot of relaxation involved in the process…

Notes: 8-10 thick slices. If using almond flour the slices might break more easily than if using just regular flour. If you want to toast the bread slices later in the toaster, then don’t use almond flour. If the bananas are very ripe (and therefore sweet) you could reduce or even remove the sweetener from the recipe. Try the dough first before putting it in the oven, to check the sweetness level and flavour.