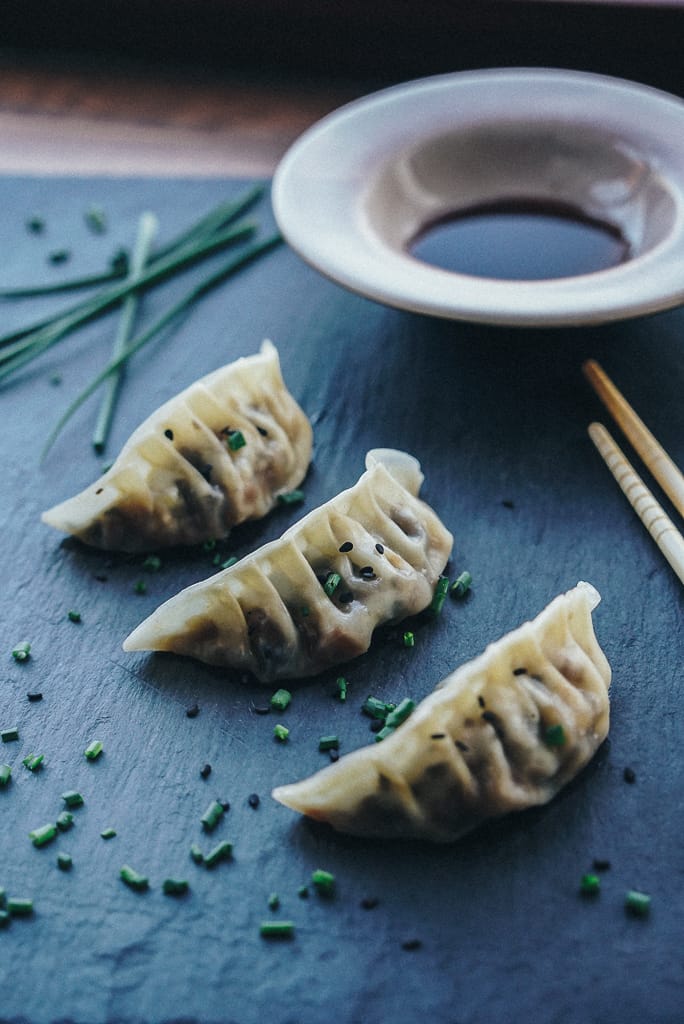 Another brief but delicious trip to Japan…

Gyōza are probably my favourite Japanese food. During the trip back in October, I tried my best to be curious and not just settle for the things I knew I liked. I was excited to try a bunch of different foods I’d read about or seen, so I focused on keeping an open mind and making the most of my time there by tasting new things wherever I went. However… gyōza were just inevitably amazing and just everywhere; they were hard to avoid. The truth is, it wasn’t just about the gyōza, but the whole ritual.

You walk into a gyōza bar, like Harajuku Gyōzaro in Tokyo or Tiger Gyōza in Kyoto. It is usually a small place, longer than wider, with a bar and few busy people behind it preparing food, a few more people seating in front of it too; they are hungry and must be excited.  You sit down at the bar, they serve you a menu which usually consists of only a couple options: boiled or grilled, pork or pork & prawns, with more or less spice… More modern places might also offer vegetarian options or other more innovative options. The artists behind the bar shape and fold gyōza, 2 per minute or more, and if fried, they place them on a hot iron pan, fry the dumplings for a minute, then they add water and cover them until fully steamed. A few minutes later six gyōza are on a plate served in front of you. Next to them, a really cold beer, perhaps an Asahi, in an even colder glass. You grab your chopsticks, and you dig in.

Cheap, comforting and freshly made, what else can you ask for from a meal?

Once you are done, you stand up, say (bow) thank you to the lady across the bar who was shaping the gyōza, you go to the till and pay 550Y (4.50€) and whatever the beer cost. Arigato gozaimashita!

Gyōza is the sibling of the famous Chinese dumplings jiaozi and, based on personal experience, could be the cousin of the Polish pierogi and distant relative of the Spanish empanadillas (different dough base, but similar concept).

The origin of the jiaozi, not to our surprise, is quite unclear. There are various folk stories which try to explain where it all started. Traditionally, they are thought to have been invented by Zhang Zhongjing in the Eastern Han era (25 – 220 AD). He is well known for being a prominent physician at the time who made great contributions to the development of Traditional Chinese Medicine. During Winter, it is said that he treated poor people who had frostbitten ears from the cold, by stewing lamb, black pepper and other warming medicines in a pot and filling small dough wrappers that he would then boil and give to his patients, along with the broth. He would do this until the Chinese New Year. Jiaozi were originally referred to as “tender ears” (jiao’er).

There are other theories about its origin and where the name comes from, but we won’t go into them today. Plus, from all of the stories, the above one was my favourite.

So how did the jiaozi arrive to Japan? That is a bloodier story. After several years of conflict, in 1937, war was declared between China and Japan; this was later considered part of the Pacific War of WWII. During those years of conflict, there was a constant presence of Japanese soldiers in China. Early in their fighting, the Japanese invaded the area of Manchuria, and this is where they learned how to make dumplings, among other foods, I imagine. When WWII ended in 1945, the soldiers went back to their homes in Japan and besides the pain and sorrow of having lived through a war, they also brought home traditions and foods like the jiaozi.   The Japanese word gyōza (ギョーザ, ギョウザ) is derived from the reading of 餃子 (giǎoze) in Jilu Mandarin, and the selection of characters (katakana) apparently indicates that the word is not of Japanese origin.

It is unlikely that this type of dumpling was never before present in Japan, but that was a turning point in terms of popularity and how widespread it became.

How to cook them

Gyōza, like jiaozi, typically consist of dumplings filled with a ground meat and/or vegetable filling wrapped in a thin dough, which is then sealed by pressing the edges together. Finished gyōza can be fried then steamed (yaki-gyōza), boiled (sui-gyōza) or deep-fried (age-gyōza). Today we’ll make yaki-gyōza.

In the classic Japanese pork & cabbage recipe the ingredients are mixed raw and cooked only once they are wrapped in the dough. Since I wanted to try to make them vegetarian, I went for a different recipe.

The first recipe I tried wasn’t what I was looking for: the filling of the gyōza is typically mushy, compact and soft, it doesn’t break apart. The recipe didn’t include any ingredient that made the filling bind properly, so when eating it the inside of the gyoza broke into pieces. Also, I think I chopped the mushrooms into slightly larger pieces than I should’ve.

The first time I boiled the gyōza they even broke while being cooked. I realised after that I had added too much water to the pan, overcooking the dough they are wrapped in, which led them to break. I didn’t get quite what I wanted the first time, but practice makes perfect (or edible) gyōza, and the following rounds were more successful.

The photos in this post show the process and successful result, but below are the gyōza I cooked the first time – see how broken and blobby they look? Not what we’re aiming for, people!

Next time I make them I will let the classic recipe guide me. I  will also update this post with more photos and comments.

In any case… the truth is they were still good enough to satisfy the craving, despite not being the “real thing”. There is something incredibly tasty about eating a dumpling or anything which is filled and wrapped in a dough (empanadas, ravioli…). Folding the gyōza happens to be a very mindful and relaxing practice too. So here you go, two reasons to make these gyōza! Oh and there’s a third: you can make dozens and freeze them for when you are lazy and just want something quick for dinner!

I hope you enjoy,

To prep and cook the gyozas

You can choose to freeze the gyozas on a sheet pan then, once frozen, place in a bag and leave in the freezer.

You might notice that there is we use a tiny amount of salt in this recipe. Since we are already using soya/tamari sauce, this is already enhancing the flavour and adding a nice saltiness to the food. No need to add too much salt; unless you are Swedish, of course 🙂

Notes: In the pictures, you might notice that I cooked the mix of veggies on a pan before shaping and folding the gyozas. This was the first recipe and way of making gyozas. With time, I have chosen to simply chop ingredients finely and add them raw in the gyoza wrapper. The result is still delicious and overall it saves you 10-20 mins of sauteeing and waiting for it to cool down.